Matthew Rosenberg continues to give us a great roller coaster ride at the helm of this Punisher title.

Last issue we saw the appearance of Jigsaw in a Punisher book after eight years since his last appearance in The Punisher: “In the Blood” miniseries by Rick Remender. It was a brief appearance but really satisfying. I was never a fan of Jigsaw but it was great to see him back and tried to capture Frank while he was in jail. And all the action and crazy starts at this moment. You can expect an Avenger appearance and it really helps connecting the character to the main Universe 616 and his actions are not vain and the superhero community is watching him.

The pace continues to be great and Rosenberg doesn’t let the readers breathe with a tons of things happening at the same time. It’s clear that Rosenberg brought tons of classic elements into this new saga, it never gets old and it will be a treat to all good old Punisher fans. I feel that what’s happening during this arc is like a “street level” event within the Punisher book, something that I’ve been waiting for years.

The story continues to give us Frank hunting down Hydra and hitting where it hurts. But you can count with some unexpectable resistance to his actions and once again, it will lead us to another month waiting to see how Frank is going to get out of this tough situation.

I can’t get tired to praise Kudranski’s artwork. He is fantastic and he’s improving and refining his artwork in every issue of this saga. The panels are such a treat, the backgrounds and the action scenes look like a John Woo film. Count with a great dynamic 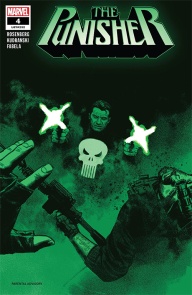 and of course the engaging colors of Antonio Fabela.

Fabela’s is part of the success of this fantastic creative team with a huge help in the coloring of this issue, the colors were right and since number #1 that his work as coloring is stable.

Greg Smallwood continues to give us great covers. This is the Punisher show and his simple covers with only Frank in the front is everything we need to see that this IS a Punisher book.

Final note: I’m really satisfied with the work of this great creative team. This is a Punisher book and for those who know the character know what they will find in this book. And they deliver it.