Frank Castle had an unusually prominent presence in the War of the Realms. He helped Thor, Wolverine, Blade and Lady Freyja among others stop Earth’s invasion from Malekith’s forces and for three issues, Gerry Duggan (Infinity Wars, Deadpool) gave him his own “fun” solo adventure where he helped a few patients and medical staff escape to safety with the unique “usage” of New York’s prisoner populace. At the end of that event, Kasyckla, the frost giant who murdered the wife and children of Frank Jones (the first civilian Frank encountered during the epic event) escaped. When Frank visited Jones at his family’s funeral to double-down and reiterate his promise of vengeance in the event’s epilogue War of the Realms – Omega, Jones introduced Frank to a group of orphaned children also desiring punishment for their deceased family members, complicating and compounding his dimensional journey of punishment. The bodycount and results play out in Punisher: Kill Krew, a 5 issue sequel also by Gerry Duggan. In this issue alone, Frank finds the time to ne a surrogate father eating ice cream with several children while also using a civilian for bait to murder a demonic tree. VARIETY!

One of the main concerns for Punisher fans is the proper grounding of Frank Castle in the middle of the Marvel 616’s greater “weirdness”. With a history of brainwashed maniacal behavior, zombification and team-ups with Hydra goons, The Punisher’s major 616 event track records have enraged and frustrated many loyal Punisher fans.

Having delivered in War of the Realms – The Punisher, Duggan once again reminds the readers that The Punisher comics can be fun and sometimes “goofy” with Punisher: Kill Krew #1.Providing the reader with recap, context and history of Frank Castle’s War of the Realms involvement, Punisher: Kill Krew #1 serves as a great jumping on point for fans seeking to enjoy The Punisher’s role in this epic event. Readers will love the return of Frank’s inner monologue AND the return of his War Journal, a crucial Punisher story telling device tragically lost and forgotten throughout most of the past decade. It is a testament to Gerry Duggan’s writing that he still manages to preserve the humanity, dark spirit and black humor of The Punisher series in the midst of frost giants, flying goats, thunder gods and extra-dimensional invasion. With heart, humanity and horror, Duggan finds a way to blend Frank Castle’s moral relativity and savage violence with the fantastical.

I’m a big fan of Juan Ferreyra’s artwork. Kill Krew continues a rare tradition of the artist pulling double duty with colors. It’s a miniseries worth it for the art alone. The action scenes are excellent and having Ferreyra maintain total artistic control melds the pencils, inks and colors perfectly. One of Ferreyra’s strong points lies in the expressions of the characters. He has a unique ability to make the reader feel exactly what the character’s are feeling through their eyes. The panels are very dynamic and perfectly sync so that readers don’t miss a bit of action. To top it off, the last page is something truly amazing and probably one of the coolest Punisher splash pages I’ve seen in a while…

The cover by Tony Moore is excellent. Combining influences from Doom (1993)’s iconic cover and adorning Frank in The Elder Scroll: Skyrim’s epic Dovahkiin helmet, Tony Moore created an epic portrait of the bodycount to come. 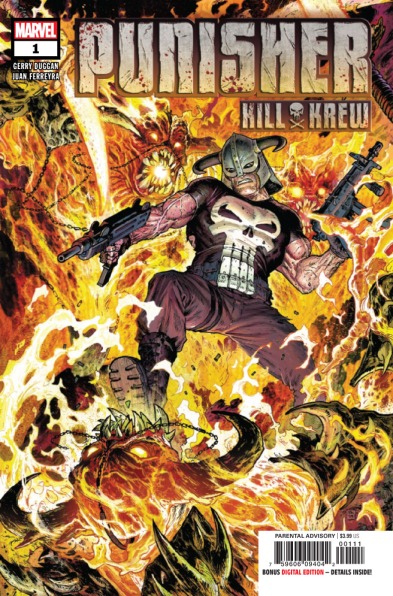 Overall Verdict: Gerry Duggan emerged as a surprising addition to The Punisher’s line of authors and creators. Despite coming from a comedic and cosmic background, Duggan has managed to capture the necessary bleakness and street attitude of Frank Castle. Charging on a magic goat into the unknown, The Punisher still feels right at home.